When does a passion become an addiction you say? Heck if I know. I am pretty sure I have crossed over the line. Sign me up for a recovery program.

I have always collected vintage tablecloths, aprons, curtains and fabrics. Most windows in my home are covered with vintage or reproduction bark cloth. My kitchen table sports a never-ending supply of colorful vintage tablecloths in fun prints. 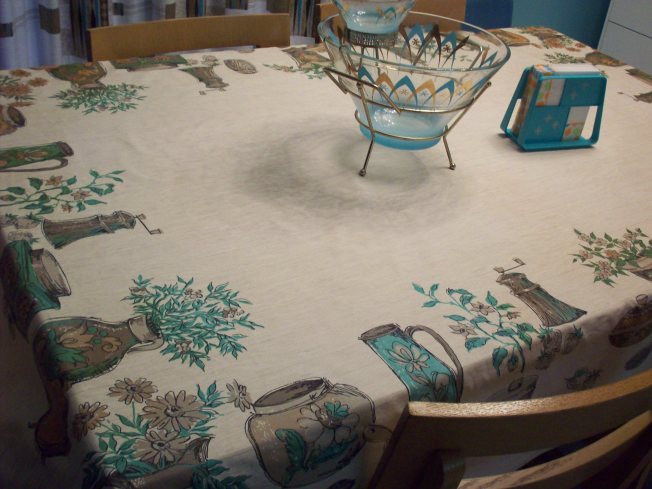 I even have a vintage laundry bag. They are great to stick in your suitcase and corral dirty clothes while you are on vacation. 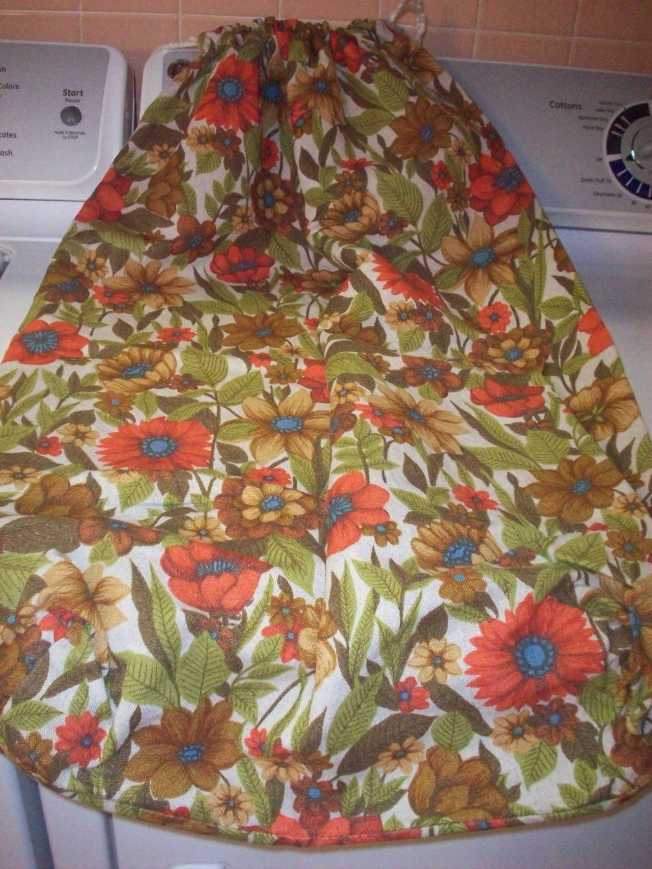 But this new obsession with vintage bedding is a recent problem that started off kind of innocently.  A few months back I decided that I wanted new (but vintage-y) bedspreads for our master bedroom and guest room. I jumped on Etsy and found 2 NOS Bates bedspreads.

The guest room search yielded a simple turquoise and very dark brown (almost black) plaid. This room is painted turquoise and the window valances are an atomic/ Tiki inspired bark cloth in brown, black, aqua, pink and maize. This simple bedspread would fit the bill and allow me to go a little crazy on sheets and pillowcases.

My master bedroom is painted Caribbean Coral and the curtains are an atomic bark cloth in brown, orange, green, gold and black. I decided that “earth tones” bedding would go great with those. My problem (or so I thought) was going be to finding vintage bedding to match. Boy was I wrong! Groovy florals. Mod geometrics. Atomic stars. I was having a ball!

After several weeks of online and thrift store buying, I have enough sheets, blankets, pillowcases and throw pillows to mix and match for several months and never repeat the same look twice. A good problem to have, no?

I will show you a little of my haul.

A NOS blanket found on Etsy, hanging on the line after a quick wash:

A few sheet changes in the master: 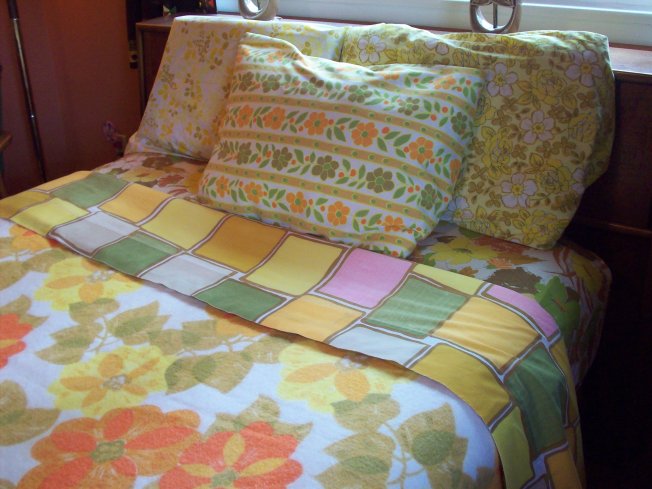 I love the geometric top sheet and pillowcases. They remind me of the Flintstones!

Here is the Bates bedspread I found in earth tones.

The starburst top sheet below is just too cool. I also purchased one in another colorway for the guest room.

I guess I just like to have plenty of “choices”.

Check back soon to see what else I have stuffed into this linen cabinet.

For 2 1/2 years we have been searching high and low, up hill and down dale for a mid-century twin bed for our guest room. It seems every one we found was very Colonial or child like. All this time that aqua room has had an antique iron bed, schlepped from the farmhouse, which was totally WRONG.

Dear Hubby unearthed this aqua vinyl upholstered bed hidden behind a  modern one at a local consignment shop.  It was one of a pair. We got the entire bed for $25! The sparkly vinyl reminds me of dinette chairs.

Doesn’t that look so much better???

I have also gotten a little carried away with the Pyrex addiction. I did not even know I needed so much Pyrex until a few months ago. How does that happen?

Like every addiction, it starts out slowly and seemingly innocent. Then the next thing you know you are using your grocery money for your next fix.

The only Pyrex I remember growing up were mixing bowls of Moms. I know the big one was pink. When I met my husband, he had a small aqua Butterprint  casserole, which had been his mother’s and was passed to him at some point. It has followed us all these years. I also know that Thanksgiving stuffing at their home is served in a large yellow Pyrex bowl.

When we purchased this Mid Century house, I started to become interested in dishes and bake ware from the same era, not the older Depression era ones I had been using in the farmhouse.  A few garage sales later and I had a Desert Dawn pink square baker, an aqua pie plate and a Horizon blue oval baker. Hubby then gifted me with a 1961 holiday promotional piece called Golden Pine complete with stand. 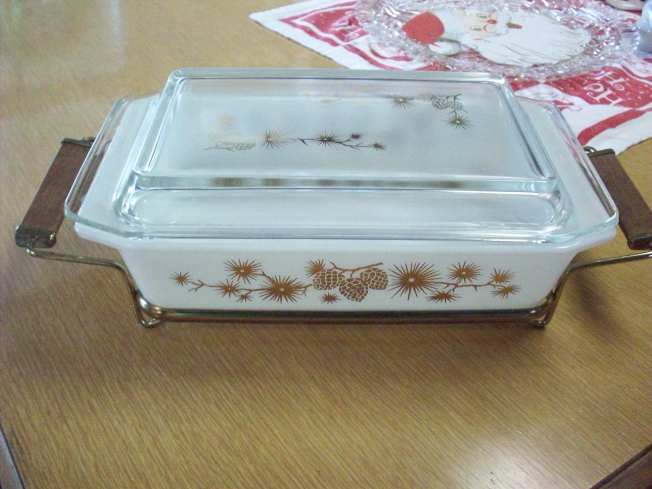 I then discovered a few websites that identify the colors and patterns of Pyrex through the years. That is what pushed me over the edge. Here are a few pieces I have found: 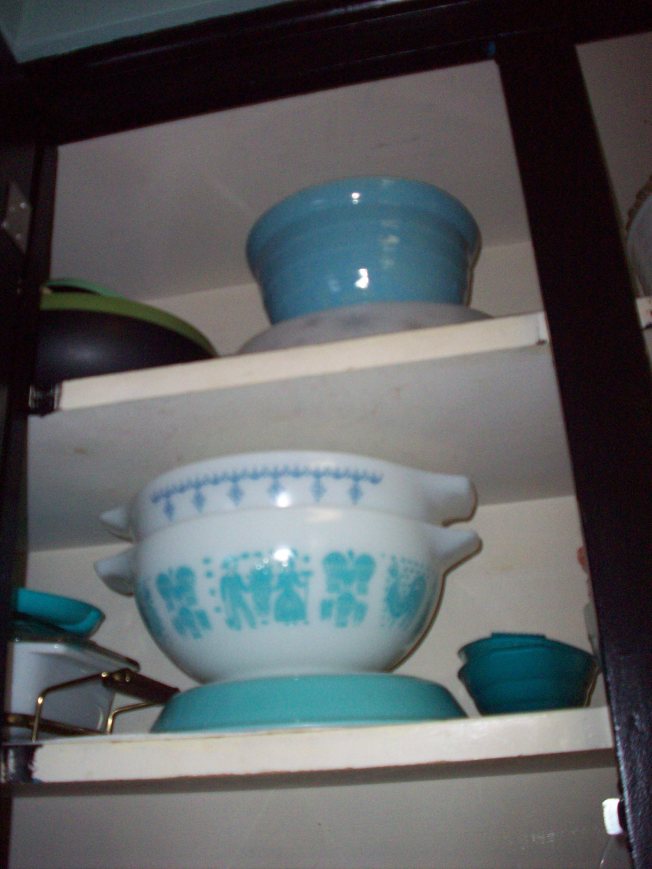 As you can see it does not stop with Pyrex. I also love Glasbake and Fire King pieces!

I am now an official Pyrex hoarder and dealer. Yep, I am now selling it, along with anything else that catches my eye.

This is just one crazy surface in my office: 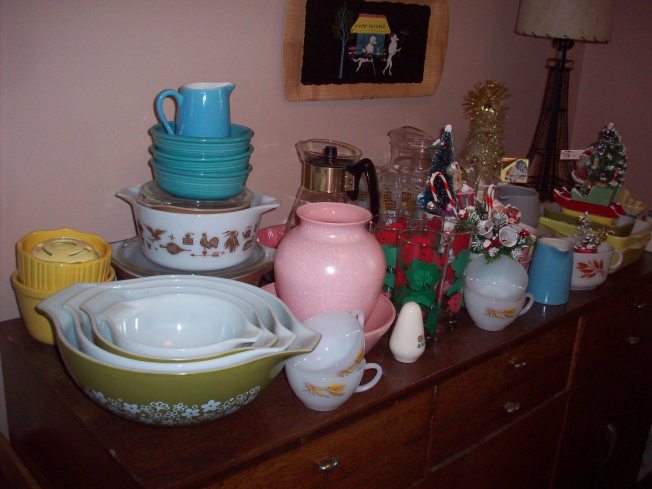 I guess it could be worse; at least it is not hazardous to my health. I do actually use it. Here is an apple cranberry cobbler, fresh from the oven. As you can see I was a little overzealous with the fruit:

And on a more sad note, last week we had to say goodbye to our faithful friend and companion Woody. He was our 14-year-old retriever, whom we had since he was a pup. Here he is hosting a sleepover for his friend Nash last summer:

I hope you are all enjoying the shorter (and a little cooler) days of late summer.

Now I can say it:

Every single room in our ranch home has been painted. Walls, ceilings, trim, floor, windows, doors,  you name it.  If it COULD be painted it HAS BEEN painted. Inside and out.

We have used the Sherwin Williams Suburban Modern Collection as our palette. That kept it pretty simple and avoided hauling multiple paint chips home to agonize over. And besides: it is just paint.

Here is the new paint scheme on the original (we think) 1951 garage door using white, Caribbean Coral and Harvest Gold: 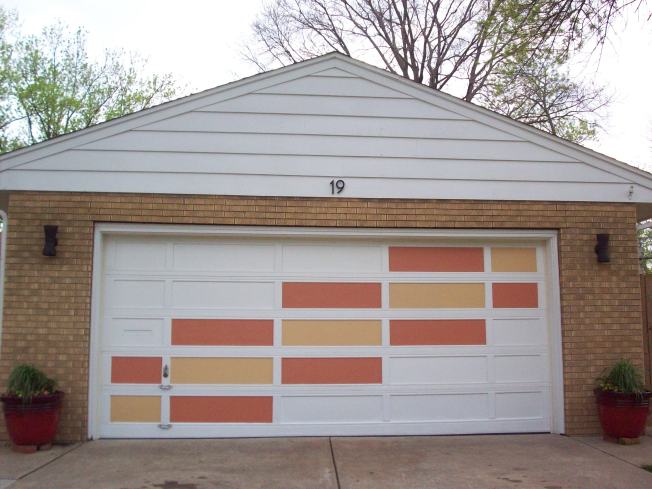 Caribbean Coral in the Master bedroom:

Harvest Gold in the living room, entry and hallway. All of the doors and trim are white:

Pinky Beige in the office:

Aqua in the guest room and kitchen. This is not a true Sherwin Williams color. It is a cross between Holiday Turquoise and Burma Jade:

The entire basement has been painted Chelsea Gray and Classic French Gray: 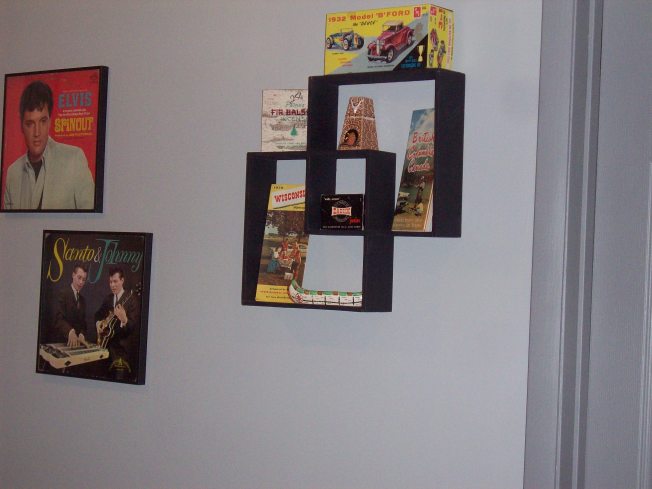 The front and back door are also Caribbean Coral.  Someday I want a true mid-century door. 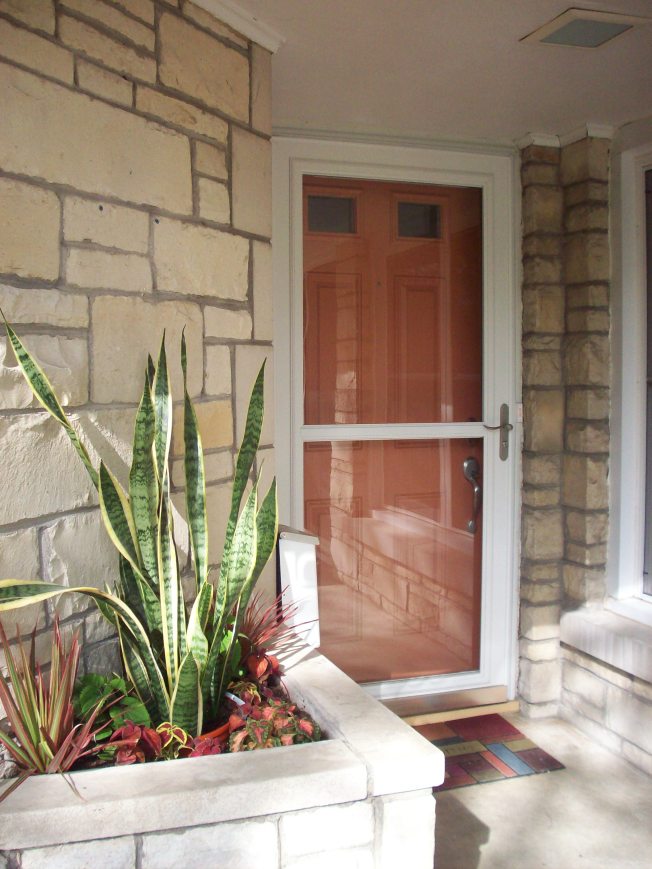 The basement floor has an Epoxy floor paint the equivalent of  Plymouth Green: 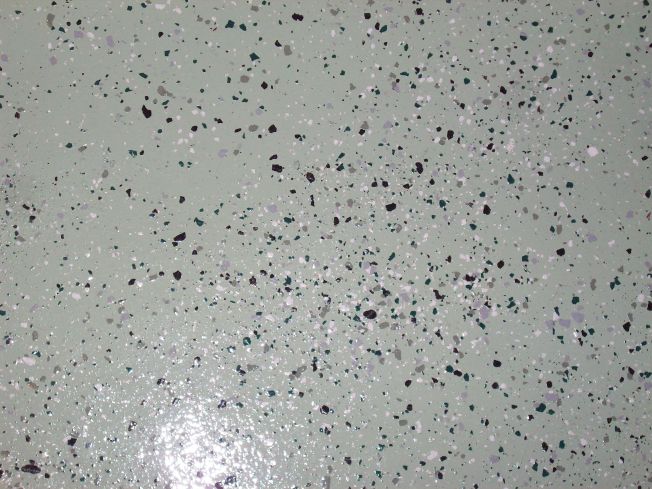 All of the ceilings (in rooms where the wall color and ceiling are not the same) are Porcelain: 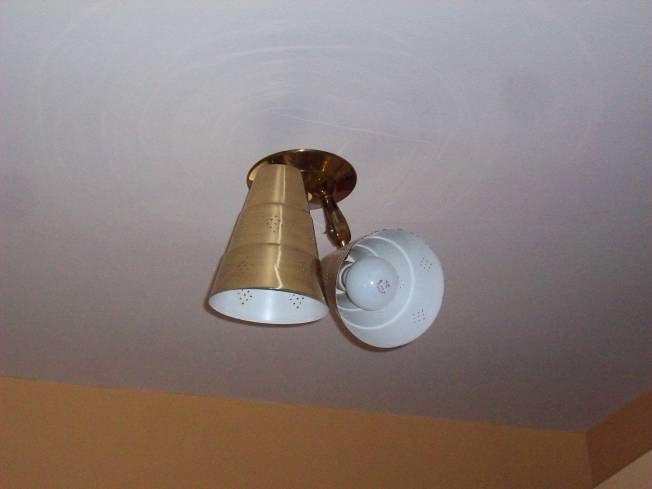 It feel so good to have everything freshly painted and CLEAN.  The prep work was unreal. We had to remove stickers,  scotch tape, sloppy caulk  and bad patch jobs before we could even prime anything.

Now on to the next project: decorating the newly remodeled basement!

Enjoy the springtime everyone!